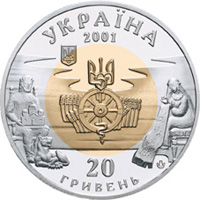 On the coin obverse in the centre of the insert ring and against the background of rye ears there is depicted of a symbolic wheel of history with a falcon sitting on it, underneath it there is depicted a snake; above and to the left there is the small National Emblem of Ukraine; within the outer ring, there are depicted a Duke holding a model of a cathedral in his hands. At Duke`s feet there is a lying cheetah; on the right there are depicted a Duchess with sewing, as well as the logotype of the NBU Mint and the inscriptions: УКРАЇНА / 2000 / 20 / ГРИВЕНЬ (Ukraine/ 20/ hryvnia/ 2000) 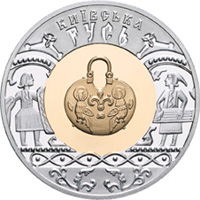 On the coin reverse within the insert ring there is depicted an old-Rus feminine adornment; within the outer ring there are depicted fragments of Kyivan ritual bracelet (12th c.- 13th c.) and the conventionalized inscription: КИЇВСЬКА РУСЬ (Kyivan Rus)

The coin is dedicated to one of the greatest early medieval states in Europe (9th - middle of 12th centuries), which appeared through unification of Eastern-Slavic tribes around Kyiv and Middle Dnipro basin