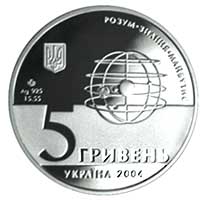 On the coins obverse there is the symbolic depiction of the Solar system as a part of the Universe, which contains `the planet of knowledge`, above it and to the right, there is a semicircular inscription: РОЗУМ o ЗНАННЯ o МАЙБУТНЄ (intellect o knowledge o futurity); above and to the left - the small National Emblem of Ukraine and inscriptions: 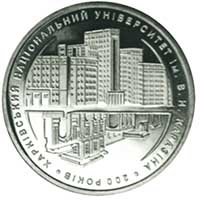 On the coins reverse on the upper part of the coin field, there is depicted the present-day University building, at the coin lower part as in a mirror reflection - the original building of the university and the circular inscription : ХАРКІВСЬКИЙ НАЦІОНАЛЬНИЙ УНІВЕРСИТЕТ ІМ. В.Н.КАРАЗІНА o 200 РОКІВ (V.N.Karazin Kharkiv National University/200 Years)

The coin is dedicated to Kharkiv National University, one of the leading centres of education and science. The university was founded in 1804 on the initiative of an outstanding enlightener V.N.Karazin and for about 200 years it has embodied man`s striving for knowledge and winning of scientific summits.