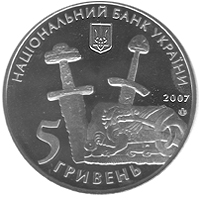 On the obverse there are swords and a conventionalized fragment of a slate, found during archeological excavations on the territory of Chernihiv, above there is the Small National Emblem of Ukraine, over which there is the semicircular inscription НАЦІОНАЛЬНИЙ БАНК УКРАЇНИ (National Bank of Ukraine), below - 5 ГРИВЕНЬ (5 Hryvnias), and on the right - the coin issue year 2007, and the logotype of the National Bank of Ukraine Mint 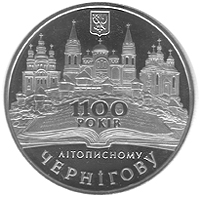 On the reverse the following conventionalized composition is placed: the ancient Chernihiv burg is depicted behind the book lying open. Above the burg the city coat of arm is placed, against the book background - the inscription: 1100 / РОКІВ (1100 years), beneath - ЛІТОПИСНОМУ ЧЕРНІГОВУ (of the written evidence of Chernihiv).

The jubilee coin is dedicated to Chernihiv, one of the oldest cities of Ukraine, the first written mention whereof was made in 907. Chernihiv as the centre of an East Slavic tribe - Siverians since the late 9th century formed a part of the Kyivan Rus and was the second important and prosperous city after Kyiv.