Buy a coin The Bosporan Kingdom 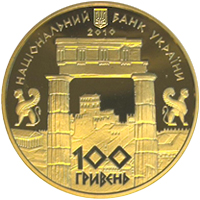 On the obverse above there is the Small Coat of Arms of Ukraine with the coin issue year 2010 thereunder and semicircular inscription НАЦІОНАЛЬНИЙ БАНК УКРАЇНИ (National Bank of Ukraine), beneath - the coin face value 100/ГРИВЕНЬ (100 hryvnias); in the centre there is a fragment of Panticapaeum ruins against the background of reconstructed appearance of the city with sphinxes to the left and right thereof. 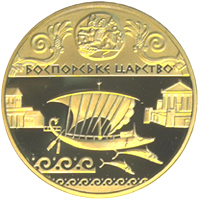 On the reverse against the dark background there is depicted a sailing vessel with images of dolphins and decorative meander lines, symbolizing the water, thereunder; to the left and right of the vessel there are depicted fragments of buildings of the city; above, against the light background, there is depicted a gold coin, i.e. Panticapaeum stater with the legend БОСПОРСЬКЕ ЦАРСТВО (Bosporan Kingdom) thereunder.

The commemorative coin is dedicated to the Bosporan Kingdom (VI-th century B.C. - IV-th century A.D.), one of the ancient states on the Northern coast of the Black Sea, which originated from a league of Greek colonies, the cities on the shores of the Strait of Kerch, with its capital in Panticapaeum, and regularly minted its coins.

Buy a coin The Bosporan Kingdom