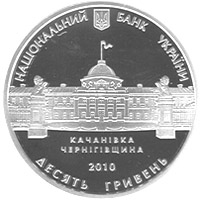 Obverse: above there is the Small Coat of Arms of Ukraine and semicircular legend: НАЦІОНАЛЬНИЙ БАНК УКРАЇНИ (National Bank of Ukraine); beneath there is the coin issue year - 2010 and face value: ДЕСЯТЬ ГРИВЕНЬ (ten hryvnias); there is depicted the Tarnovskyi`s family nest, a mansion in Kachanivka, with the legend: КАЧАНІВКА/ ЧЕРНІГІВЩИНА (Kachanivka/ Chernihiv Oblast) below it. The commemorative coin is dedicated to one of the prominent Cossack Starshyna (officership) families which became renowned for its art patronage and charity and from which famous Cossack Hetmanate figures descended: sotnyks (commanders of hundred men) and polkovnyks (colonels). A member of the family was Vasyl Tarnovskyi whose unique collection made it possible to establish the Ukrainian Antiquity Museum in the City of Chernihiv.