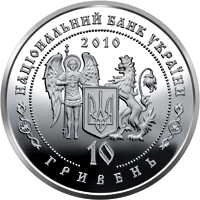 Obverse: there is depicted the common composition for the series embodying the idea of Ukraine`s integrity: the heraldic figures of the Archangel Michael and the crowned lion (symbols of the cities of Kyiv and Lviv) holding the Small Coat of Arms of Ukraine with the coin issue year - 2010 over it; above there is the semicircular legend: НАЦІОНАЛЬНИЙ БАНК УКРАЇНИ (National Bank of Ukraine), below -10/ГРИВЕНЬ (10/hryvnias). 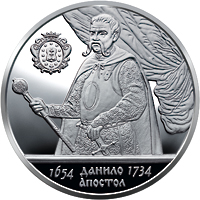 The commemorative coin is dedicated to one of the eminent military and political figures and statesmen of Ukraine of the 18th century, hetman of the Left-Bank Ukraine who made a substantial contribution to the streamlining of local self-governance, court system restructuring, land tenure regulation and trade development.