Buy a coin 1100 Years of Perejaslav-Khmelnytskyi 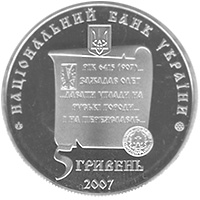 On the coin obverse there is a conventionalized parchment with passages from `The Tale of Bygone Years`; against its background beneath and on the right there is the city seal of the first half of 17th century, above there is the Small National Emblem of Ukraine, above which there is a semicircular inscription: НАЦІОНАЛЬНИЙ БАНК УКРАЇНИ (National Bank of Ukraine), beneath: 5 ГРИВЕНЬ / 2007 (5 Hryvnias/ 2007), as well as the NBU Mint logotype 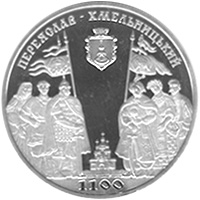 On the coin reverse there is the composition depicting two historical stages of the city development: old Rus and Cossacks, between them: an Old Rus cathedral (beneath), the city coat of arms (above), as well as the inscriptions: ПЕРЕЯСЛАВ-ХМЕЛЬНИЦЬКИЙ (Perejaslav-Khmelnytskyi) (overhead) and 1100 (below).

The jubilee coin is dedicated to one of the oldest Ukrainian cities. It was mentioned for the first time in the text of Prince Oleh’s Treaty with the Byzantine Empire (907) as one of three oldest cities of the Ancient Rus. Since the 11th century this city was the centre of Pereiaslav Principality. In the late 15th- and during 16th centuries it played an important role in the formation of the Ukrainian Cossacks.

Buy a coin 1100 Years of Perejaslav-Khmelnytskyi