Buy a coin Catherine`s Glory Ship of the Line 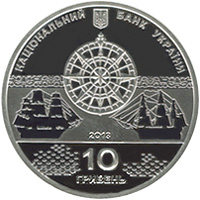 Obverse: above there is the Small Coat of Arms of Ukraine with the semicircular inscription НАЦІОНАЛЬНИЙ БАНК УКРАЇНИ (National Bank of Ukraine); in the centre there is depicted the wind rose as a symbol of the sea travels with a conventionalized vegetal ornamentation patterns and sailing vessels to the left and right thereof; between them there is the coin issue year indication 2013; below there is the face value: 10/ГРИВЕНЬ (10/hryvnias) on the silver coin or 5/ГРИВЕНЬ (5/hryvnias) on the German silver one; on the latter, to the right, there is the mark of the National Bank of Ukraine Mint. 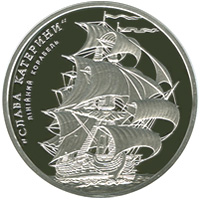 Reverse: against the mirror surface background there is depicted a ship with sails set; to the left there is the semicircular inscription `СЛАВА КАТЕРИНИ`/ЛІНІЙНИЙ КОРАБЕЛЬ (`Glory of Catherine` / line-of-battle ship).

The commemorative coin is dedicated to the 230th anniversary of launch of the 66-gun ship of the line `Catherine`s Glory`, the flagship of the Black Sea Fleet, at the Kherson Admiralty Shipyard. During the years of activity of the Kherson Admiralty, that was in 1778-1827 one of the most important centres of shipbuilding on the south of Russia, 34 ships of the line and 16 frigates were launched from its slipways. 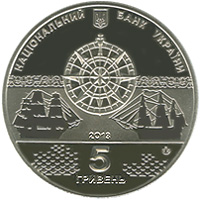 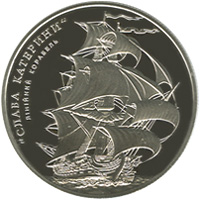