Buy a coin 900th Anniversary of the Tale of Bygone Years 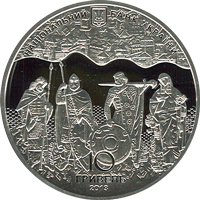 Obverse: above, against the background of conventionalized wooden buildings of an Old Rus city, there is the Small Coat of Arms of Ukraine with the semicircular inscription НАЦІОНАЛЬНИЙ БАНК УКРАЇНИ (National Bank of Ukraine); in the centre there are depicted Khoryv, Shchek, Kyi and their sister Lybid, who, according to the legends, were the founders of Kyiv; below there are the coin face value 10/ГРИВЕНЬ (10/hryvnias) and issue year indication 2013. 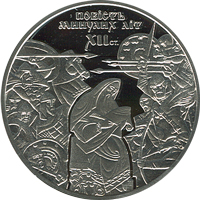 Reverse: bears a conventionalized composition of a battle scene with the image of Nestor the Chronicler in the middle; above there is the legend ПОВІСТЬ/ МИНУЛИХ ЛІТ/ ХІІ СТ. (Tale / of Bygone Years / XII century).

The commemorative coin is dedicated to the 900th anniversary of compilation of the first edition of the chronicle Tale of Bygone Years (the Primary Chronicle), the most eminent monument of the Kyiv Rus annals. This unique monument of the Old Rus annals created in the beginning of the 12th century contains data on the origin and resettlements of East Slavonians, formation of the Kyiv power, its first princes, elucidates political, military and dynastic events, and is a treasury of documents, traditions, legends and so on.

Buy a coin 900th Anniversary of the Tale of Bygone Years

Discussion coins 900th Anniversary of the Tale of Bygone Years (0)