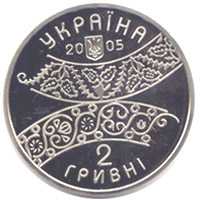 On the coin obverse there is a depiction of two national ornamentations - Georgian and Ukrainian, connected together, which symbolizes ties and friendship between two peoples; above there is a semicircular inscription: УКРАЇНА, under which there is the small State Emblem of Ukraine and the coin mintage year: 20-05; beneath - 2/ГРИВНІ and the Mint logo of the National Bank of Ukraine 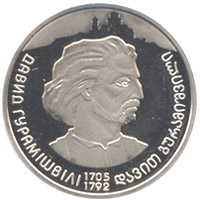 On the coin reverse there is a half face portrait of David Guramishvili upon the background of a conventionalized hilly Georgian landscape, on peak of one of its mountains a temple is located; to the left and right there is a semicircular inscription in Ukrainian and Georgian languages: ДАВИД ГУРАМІШВІЛІ, beneath: 1705/1792, his years of life.

The coin is dedicated to 300 Years of David Guramishvili (1705 - 1792), an outstanding Georgian poet, whose life and creative work were closely bound up with Ukraine: in 1760 the poet settled down in Myrhorod, where he lived till the end of his life. Guramishvili`s literary work started in Georgia, but his poetic talent become fully apparent exactly in Ukraine. His autobiographical collected poems `Davitiani` (1787), the poet`s most distinguished work, were created in Ukraine. His other poem `Joyous Spring` was full of sympathy towards peasants and had vivid Ukrainian colouring