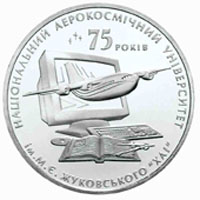 On the coin obverse against the background of an open book there is a depiction of the university building, above which there is depicted the small National Emblem of Ukraine, as well as the semicircular inscription: УКРАЇНА (Ukraine) beneath: 2005, the coin mintage year (on the left), in the middle and in two lines: 2 ГРИВНІ (2/ hryvnia) and the Mint logotype of the National Bank of Ukraine. 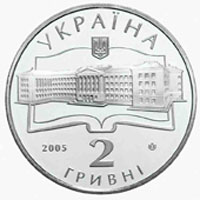 On the coin reverse there is a composition containing a depiction of a monitor with a keyboard, an aircraft and book, above which there is the inscription: 75 years and НАЦІОНАЛЬНИЙ АЕРОКОСМІЧНИЙ УНІВЕРСИТЕТ ІМ. М.Є. ЖУКОВСЬКОГО `ХАІ`( National Zhukovsky Aerospace University) around the coin circumference.

The coin is dedicated to 75th anniversary of Kharkiv National Zhukovsky Aerospace University, which history is directly connected with the development of the aircraft industry and science. This is the only institution of higher learning, where on the basis of its own design and construction office aircrafts were designed under supervision of professor Neumann; aircrafts were manufactured commercially at aircraft works and were operated with airlines.