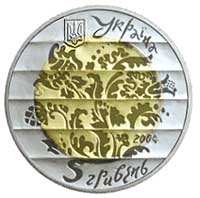 On the coin obverse its horizontal surface symbolically represents lyre strings tuning a melody like a conventionalized baroque ornamental pattern. Above there is depicted the small National Emblem of Ukraine and `Ukraine` inscription made to look like the Cossack script; beneath - 5 ГРИВЕНЬ (5/ hryvnia), 2004 (right) and the NBU Mint logotype. 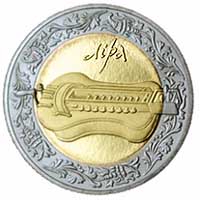 On the coin reverse a lyre is depicted, around its circumference there is a baroque ornament and ЛІРА (Lyre) inscription made to look like the Cossack script.