Buy a coin 250 Years to Kirovohrad 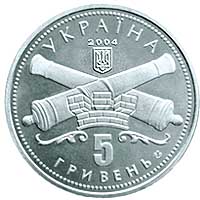 On the coin obverse there are depicted two crossed cannons, above which there is the small National Emblem of Ukraine, the coin issue year: 2004, semicircular inscriptions: УКРАЇНА (Ukraine) (above) , 5/ ГРИВЕНЬ (5 hryvnia) (beneath), as well as the Mint logotype of the National Bank of Ukraine 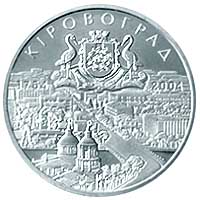 On the coin reverse there is a panoramic view of the city, upon the background of which two dates– 1754 - 2004 are depicted, the coat of arm of the city, as well as a semicircular inscription КІРОВОГРАД (Kirovohrad)

The coin is dedicated to the regional centre - the city of Kirovohrad (named as Elisavethrad before 1934). The origin of the city is associated with a foundation of St.Elisabeth fortress built upon the former lands of Zaporizhia Sich to defend southern borders of Ukraine against predatory attacks of Turks and Crimean Tatars

Buy a coin 250 Years to Kirovohrad