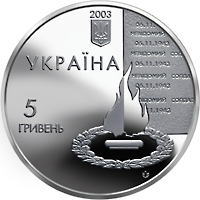 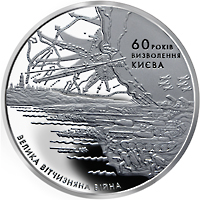 On the coin reverse there is depicted at the top a map of the Soviet troops advance, below which there is a conventionalized scene of the Dnipro river forced crossing; in the background there is depicted a panorama of the City of Kyiv; as well as the following inscriptions: above - a three-lined inscription: 60 РОКІВ ВИЗВОЛЕННЯ КИЄВА (60 Years of the liberation of Kyiv), beneath to the left -there is a semicircular inscription - ВЕЛИКА ВІТЧИЗНЯНА ВІЙНА (Second World War)

The coin is dedicated to the 60th anniversary of the liberation of Kyiv from fascist invaders in November 1943 in the course of the battle for Dnipro, an important offensive operation of the second phase of the Great Patriotic war, in the result of which the `Eastern Barrage Fire` was destructed and the radical turn in the course of the war was completed 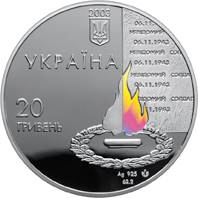 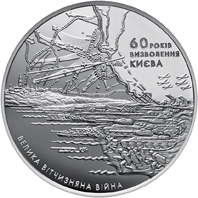